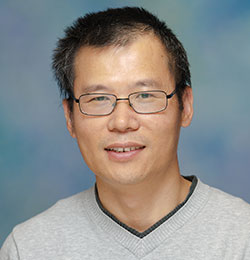 Ruqiang received his BS in Biochemistry from Sichuan Univeristy in southwest China, and his Ph.D. in Biochemistry and Molecular Biology from Shanghai Institutes for Biological Sciences, trained in fluorescence spectroscopy and protein thermodynamics.

He did his postdoc studying gating mechanism of electromotility motor prestin at the University of Kentucky, and changed into microRNA functional study in aging at the University of Louisville. Ruqiang joined the Tian lab in February 2014 after working as a research scientist in Washington University on presbycusis study.

Ruqiang likes to travel, see movies, and read after work.